Now, Lord, consider their threats and enable your servants to speak your word with great boldness. Stretch out your hand to heal and perform miraculous signs and wonders through the name of your holy servant Jesus. Acts 4.29, 30

Imagine that thousands of people suddenly came to the local churches, or that persecution started. What would happen to the churches?

Just imagine that 1,000 new people began to follow Jesus. Your building holds 200, and your pastor cares for all of them. Calculate how much it will cost to employ more pastors and either enlarge your church with space to grow even more, or to build more church buildings in the districts.

Write 2 pages to compare modern denominational structures with the effective simplicity of New Testament structure. Say why one or the other is better.

Meditate Word By Word On This Verse 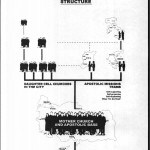 In the first century the new wine being poured out by God's Spirit needed new wineskins to contain and mature it. Many thousands of people suddenly followed Jesus but trouble was not far behind!

What If That Happened Today?

Worldwide, two clear trends are being seen in today's Church. What will you do if either of these comes to your nation?

In Argentina, South Korea and parts of Africa millions of people have decided to follow Jesus and come to church.

In recent years many churches have been burned in Bosnia, England, India, Indonesia, Ireland, Liberia, Pakistan, Senegal, Sierra Leone and the Sudan. In Rwanda when violence came many believers fled to the church building, where their enemies found them and massacred thousands.

Prophetic Or Just A Question?

In growth or persecution, or if both happen at once, will our traditional structures of buildings, church government and professional clergy be adequate?

In Growth, What Will You Do?

Can you pack the new people into existing buildings and expect the paid leaders to work ten times harder? And if you suddenly need more buildings, where will all the money come from?

In Persecution What Will You Do?

In Rwanda the church collapsed but in China, in 1948, when churches were closed, the pastors killed or imprisoned and all missionaries expelled, the church did not die. Why not? Because the church was flexible and changed its shape back to New Testament structure and grew in that great adversity from 8,000,000 to maybe 80,000,000 believers by 1988.

A church that is expecting the end-time harvest will be ready, whatever happens, by ensuring that it's structure is the one that can handle both growth and survival. The book of Acts is God's text book for church structure. Let's look and we will discover three key strategies.

The Church, Not Churches

The only divisions we find are geographical, not denominational. There are no Catholic, Baptist or Pentecostal splits in the Bible, or in heaven either ! What we do find is the Church. In Jerusalem, at Antioch, in Ephesus, and so on. In growth we need each other, because when Jesus gave Peter a huge catch of fish, he had to call other boats to come and help him. Luke 5, 4-7. In times of hardship different parts of the Church help each other. Acts 11, 27-30.

The main churches in Acts and the Epistles are known as Mother Churches because of the new life they gave to their regions. The church in Thessalonica was a model church for all of us, 1 Thess. 1.7. But Jerusalem, Antioch, Ephesus, Philippi and others were much more than local churches. More than meetings they typically had Holy Spirit activity, prayer, evangelism, prophecy, and doctrinal conferences. There was plurality of leaders, and a living, caring community, especially in Jerusalem. Acts 2.42-47; 4, 32-34. They faced persecution, and handled legal challenges.

They Were Also Apostolic Bases

What is an apostolic base? It is a model church, where apostles and people are gathered together by the Holy Spirit. The word apostolic really means missionary, so a mother church becomes a launching pad and a resource base of men, money and materials for missions, where mission strategy is developed and apostolic teams and aid are sent to other churches and out to the nations. It is a place of fellowship, renewal, accountability and support for people who are sent by God, but never a 'pyramid' commanded by one super-apostle.

Does Mother Church Have A Steeple?

Until the 4th century no church had a steeple, or even a building! Rapid growth, many poor people and cruel persecution meant that the churches had to be flexible, capable of unlimited expansion without costs for buildings, and had to be able to survive under threat, and have as many people as possible mobilised into service.

How did they do all that? By using a cell church structure and meeting in many homes under apostolic covering. They only met all together from time to time. See ~ A Cell Church

People like Philip would go out from a mother church, preach the gospel, gather the new believers, and leave a new daughter church behind, watched over by the mother church's leaders until it became mature. Acts 8, 4-17. A daughter church should be missionary in its own right from day one, seeking to plant its own daughter churches. See ~ A Mother Church, page 25

The final part, the arrow tip of New Testament structure is the apostolic team. Acts 13.1-4. These are people who are called by God to go to the nations. They are released from all local responsibilities and sent on their way. On the road they support themselves, govern themselves and duplicate themselves into:

New apostolic teams like the team from many churches in Acts 20,4.

Then they report back home and share in the church leadership until they go again. See ~ A Missionary Church, page 39