Here Is Your Memory Verse
He will wipe every tear from their eyes. There will be no more death or mourning or crying or pain, for the old order of things has passed away. He who was seated on the throne said, “I am making everything new!” Rev.21, 4-5

Afterwards Talk About This
All that you have to look forward to in the glorious and certain future planned by God from eternity for you.

Something To Do Before Next Time
Ask permission to go into schools, colleges and universities to share this Christian world view of the past, present and future.

Written Diploma Work
Describe on one page what Hebrews 6, 4-5 means by tasting the gifts and powers. What can the full banquet be like?

Meditate Word By Word On This Verse
Revelation 20.15 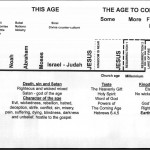 You may think that Christianity is something quite new in the earth, or that it is a western religion that makes a bit more sense than local beliefs. But you would be very wrong. You are about to discover your true identity and see that you are part of a huge living family with a history that stretches back to before time began, and reaches forward into a glorious future. Here is a brief explanation of the chart:

This present age began by God’s creation of the universe, the Earth and Adam and Eve, not by evolution from a ‘big bang.’ After the fall of man, this age up today is represented by the list on the chart, titled death, sin and Satan.

Early Events In Human History Creation, sin, the fall of man, death, the promise of God to put things right, the birth of enmity with Satan and the start of his contest for world power. Mankind divides into Cainites who are known for violent ungodliness and Sethites like Enoch who are Godly. However there is intermarriage between spirits and humans, or a spiritual invasion, and this brings a major crisis of sin on earth. Genesis chapters 1 to 5.

Noah, The Flood And A Covenant Genesis chapters 6 to 11.9. However sin remains: Gen. 9.20-22, and soon turns to idolatry which God judges at the Tower of Babel, where the nations and cultures are born: Gen. 11.1-9.

Abraham In Genesis 11.27-12.1 onwards God turns his attention to one man, Abraham, who is destined be father of a new people, the people of God.

Isaac And Jacob Abraham’s son and grandson inherit the same promise as he received, Genesis 12,1-3, which is passed through Joseph into Egypt and 400 years of slavery. See Genesis 21-Exodus and lesson 29.

Moses To Israel And Judah Moses rescued the entire nation out of Egypt by God’s hand and they met with God at Sinai, Exodus ch. 19 and 20, lesson 29. Even though they never became a kingdom of priests and a holy nation, they represented faith in the one true living God for 1,500 years, always looking for a future kingdom. Judges – Malachi

Jesus The announcement of something new from God came to a peasant girl in a northern bush town. To shepherds who didn’t even have the right to testify in a court of law and perhaps most amazingly to astrologers. Where were the theologians, the media people, the powerful and the religious who would make sure that the Son of God would haul Judaism back to God and his holy calling? God knew that demon powers lodge in those who control society. Therefore this gospel, this child, was entrusted to peasants, shepherds and to astrologers seeking something beyond the stars.” From Gerald Coates.

Jesus, The First Of The Age To Come John the Baptist announces that the kingdom is near, the end of the Old Testament. Jesus preaches good news that the kingdom is near, and teaches men how to enter. Jesus sends out his disciples to say the same and his miracles prove the arrival of God’s kingdom. Jesus confidently announces the future laws of the kingdom and teaches kingdom life and destiny through the parables, as fact not hope. He promised that his kingdom would transcend his death and told us to pray for more of this kingdom to come. In effect Jesus declares war against Satan’s kingdom rule. Matthew 3.2; 5.20; 7.21; John 3.3; Matthew 10.7; 12.28; Matthew chs. 5, 6 and 7; Matthew 13.11; Luke 22.30; 11.2; Mat. 12.26 and 1 John 3.8.

The Cross Clears The Way The enemy is disarmed, Col. 2.15, but is still present and very dangerous until Jesus comes again.

The Age To Come Begins To Enter

The resurrection. John ch. 20 to 21. The first bible school, Acts 1.3 The promise of the Holy Spirit, Acts 1.5 The long-term strategy, Acts 1.8 The Church Age Begins The age of Christ’s concealed glory. We only taste, but not yet feast on that list on the chart titled ‘Taste.’

“The Holy Spirit empowers the counter attack as the two kingdoms enter into conflict until Jesus returns. Acts 2.1-4. Satan receives a setback every time the sick are healed, every time a demon is cast out, every time a lost soul is saved; every time races live together in love and harmony; every time greed is exposed and punished; every time families maintain holiness and purity. Satan comes to steal, kill and destroy, but Jesus comes to give abundant life.”

The Second Coming Of Christ As King The age of Christ’s manifest glory. The first resurrection, 1 Cor. 15,35-57. Satan is bound and Jesus physically reigns on earth for 1000 years until Satan is released and men follow him again, still captive by sin, Revelation 20, 1-8.

Second Resurrection The final judgement and the opening of books at the great white throne of God. The eternal confinement of death, Hades, Satan, his servants and all whose names are not written in the book of life, in the lake of fire. Revelation 20, 11-15.

The Kingdom Of God Fully Comes

Unending time, a new earth and a new heaven and the just rule of God. See the final list on the chart and thank God for bringing you safe into his kingdom.

Taken from the Joshua Project Unreached Peoples List these people have no church and as yet no cell, church or mission has committed themselves to prayer, adoption or church planting among this people. United Arab Emirates