Then they said to each other, "We're not doing right. This is a day of good news and we are keeping it to ourselves." 2 Kings 7:9

What sort of people are you going to look for to form the small group that you will meet with to share what you have learned.

Choose at least three but no more than twelve people who will agree to meet with you regularly in a home or a hall. You will pass on to them all that you learn from these sessions together with your teacher. Ask them to also pass on what they learn.

Write down in no more than two pages, the three steps that you can see in 2 Timothy 2.2 and explain growth by multiplication.

Meditate On This Passage

In soccer the new players learn from their coach; perhaps he used to be the star of the team. In a workshop you find young apprentices learning the trade from a skilled master craftsman. Learning from our Master, Jesus, is what discipleship is all about, and it’s powerful. He is the Teacher, and we are his disciples, that is men and women under his loving discipline and training. 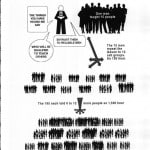 The Amazing Power Of Discipleship

A pastor from Taiwan travelled to Central China every two months for two years to secretly train fifteen men with all that he knew about Jesus and winning souls. These men in turn each repeated the teaching to twelve other men who also in their each turn told many more people.

In 1993 they had a month of evangelism when around 1,500 of these now well-trained workers went out on foot, on bicycles, on buses and trains all over China to tell others about Jesus. When they returned and reported, the pastor from Taiwan counted that more than 100,000 new believers had been baptised in just one month of putting his teaching into practice.

Let’s Look Again At What Happened ~

Then the 15 men each taught 12 more men and women, so in all 195 people now heard and copied the lesson.

Then the 195 men and women went to their homes, far and wide and each taught between 6 and 12 more people and so in total about 1,500 people heard and copied down the teaching heard in step 1.

That’s The Power Of Discipleship In Action

Remember that all this took place in homes, under trees, and in quiet places to avoid the police and persecution. No expensive buildings, equipment or text books were used. Only quiet words, copying and prayer just like happened in the countryside in the first century, after Jesus told people to go and make disciples.

Must A Bible School Have A Building?

Is going to Bible School for a year or two the only way to learn God’s ways? But what happens when thousands come to Jesus, and all want to know more and do something for the Lord?

Where will they find the money or the time away from family, work and church? Where will you find the teachers, the buildings, the beds and the meals. Even bringing 500 people together for a week means 1,000 bus fares, 500 sleeping mats, 500 toilet places, 500 notebooks and pens and 10,500 meals and water over the week!

Is There Any Other Way?

The rabbis also had fixed schools but Jesus chose another way altogether. It is simple to organise, not expensive and there is room for everyone to come.

How Did Jesus Train His Followers?

Jesus spent much of his time personally training small groups of 3, 12 and 72. They became friends. He taught them privately, and they learned more at public meetings. They were sent to travel and to try everything they had learned for themselves. When they returned they told Jesus all about it. Matthew 10.1, Luke 9,1-10; 10, 1-24

Be warned at the beginning

Discipleship releases God’s word and his Spirit and that brings out the best and the worst in you. Discipleship brings earthly loss but great inner, eternal gain. On one occasion the disciples were rowing across a lake when a storm hit them. They were in the centre of God’s will but they still got very wet and frightened! Mat. 8, 23-27.

When he travelled he took a team with him and they learned by seeing what Paul did and by doing the same. Acts 20, 4-5. When Paul was in Ephesus, that’s Izmir in modern Turkey, he found some believers who were so ignorant they had never even heard of the Holy Spirit. So Paul taught them, prayed for them, and met them every day for over two years. They learned at the feet of the older man as apprentices, or disciples.

What Do You Think Happened?

Churches usually grow by addition as one or two more people come and hear the gospel. But in growth by multiplication, many hear the Bible, respond to God’s love and then cell church begins where they live.

This can happen in your village by releasing the power of discipleship. It means remembering or writing down all that you learn and then organising yourself to regularly pass it on to a group of friends, who will then go and tell others. Paul gave his young disciple Timothy three steps:

Choose your disciples. Meet together, maybe at home to tell them all that you have learned in this lesson and tell them what they can learn in the future by coming back. Then organise your friends to also pass on God’s word to others. 2 Timothy 2.2; 2 Kings 7.9