For even the Son of Man did not come to be served but to serve, and to give his life as a ransom for many. Mark 10.45.

Compare the styles of leadership at work and in the institutions of your country with how it should be in the Church.

Write a page to explain the practical differences between two churches, one has a shepherd, the other is led by a 'butcher.'

Meditate Word By Word On This Verse

Being a church or mission leader is quite different to every other kind of political, military, business or religious leadership. In the world one man at the top dominates everyone else through rank, pressure or the fear of loss of job. He, or shareholders receive the major benefits whilst the workers may live in hardship. No wonder we have revolutions and strikes. It is sad that some churches are also governed in the same way. Discontent is inevitable.

A wise elder once said, "Only two kinds of people deal with sheep – shepherds and butchers!

Which One Is This Man?

He loves to be number one. He avoids genuine men of God. He speaks maliciously about people. He controls people in the church, exercising lordship, which is a form of witchcraft. He is Diotrephes, in 3 John 3-10. There are some more really bad shepherds in Ezekiel 34, 1-6, and Zech. 11, 15-17.

How Can You Know The Bad Ones?

In banks the staff learn to discover false notes by continually handling genuine ones. As soon as a forged note is touched, they just know it. We can also escape being fooled by false leaders by becoming familiar with the genuine.

Jesus, the fearless Lion of the tribe of Judah is also the gentle Lamb of God. A leader today may have to roar like a lion at sin, but he also has to be humble, meek and lamb-like towards the people.

The Way Of The Saviour

Men normally rule through military, political, financial or religious power but Jesus chose another kind of power altogether, one that is rarely considered and often despised. The awesome power of humble, sacrificial service.

In Mark 8.31, Jesus announces his incredible plan to win the loyalty of a world of people, by embracing suffering, enduring mockery, humiliation and torture without resisting, and by accepting rejection, betrayal and even death without complaining. Philippians 2, 6-11; John 12.32. Jesus speaks about a resurrection, but although the disciples don't understand Satan clearly does and immediately opposes the plan through Peter, Mark 8.32,33

In Mark 8, 34,35, Jesus says following him means self-denial, suffering death to self on the cross and losing your life for the Lord. The reward of such loss for Jesus and the gospel is the gain of real life!

Can I Be The Leader?

In Mark 9,31-39 Jesus repeats his plan of humble, sacrificial service again. Incredibly the disciples respond by arguing over their own rank and which of them will be No.1. Jesus replies that to be first one must make himself the very last and be the servant of all, even of children and others who are different.

Can I Be Lord?

In Mark 10,32-45, Jesus explains his plan of humble, sacrificial service for a third time and now it is James and John who strive for the rank and power of lordship rather than service. Jesus replies that only Gentile rulers lord it over people and that must not happen amongst his followers saying, even the Son of God did not come to be served, but to serve and to give his life.

The Only Way Up Is Down

Jesus went down into death and rose again. The plan worked and today he leads millions of loyal, loving, thankful people of all colours and cultures. Jesus, perfectly Lion and perfectly Lamb gave us only one leadership example and style, one of humble, sacrificial service. Whatever personality and culture a leader has, he or she will do well to humbly, sacrificially serve in the way of Christ.

Can It Be Done?

Paul's first letter to the Thessalonians, 2, 1-13, reveals a testimony of servant leadership in practice. Paul persevered through suffering and insults, and had no impure motives or tricks. He lived to please God not men, flattered no-one and was never greedy for money nor a burden to anyone, being gentle and caring, genuinely desiring to be with the people. He was seen to be holy, blameless and righteous. Now who would not love a minister like that?

Interestingly even the harsh secular world recognises the beauty of servant leadership in an ugly world of lordship. TIME magazine, May 9,1994, reported that "French polls show that priest of the homeless, Abbé Pierre to be the nation's most admired person."

How Does It Work Out Today?

Ephesians 4.11 tell us that God has given apostles, prophets, evangelists, pastors and teachers to lead the Church, and 4.12 tells us that their job is to prepare the people for the ministry, not to do it all themselves. But how? 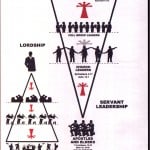 Turn The Triangle The Right Way Up

In the world the triangle has the man at the top. The orders flow down, the wealth flows back up. However, in God's Kingdom the world's triangle must be reversed with the most gifted and capable men, in plurality of leadership at the bottom on their knees supporting the next level of leadership, who in their turn support the next level until all the people are supported and elevated closer to God.

Why Are The Apostles At The Bottom?