A DCI Banking for the Poor Project Idea : The story of Gertrude and her goat

A modern day parable of how something small can achieve a lot.

With thanks to Christian Aid for the idea and the story which we have made our own.

Gertrude had seen her country, Burundi, (but equally it could be Uganda, Sudan or any one of a number of African countries) torn apart by years of civil war. She’d seen her neighbours murdered and lived in constant fear. Desperately poor, she faced a daily struggle just to survive. She’d lost count of the times she’d sent her children to bed hungry.

But despite her suffering, Gertrude did not give up. She and her neighbours turned to the National Council of Churches for help. Other people have turned to The DCI Fund in England, the owners of this web-site.

Help came in a surprising form.

The women were given a loan – not of money, but of ten goats. The reason why soon became apparent. The goats produced milk and Gertrude’s children had nourishing milk to drink. Their health improved significantly.

The goats also produced manure, which the women used to fertilize their small plots of land. Their crops grew much better and they grew more of them. Not only did the families have more food to eat, there was also enough left over to sell. This meant more money to pay for clothes, medicines and for their children to go to school.

The first ten kids were given straight back in order to repay the original loan.

The women could then keep the goats they had originally been given and continue to reap the benefits.

Most important of all, they didn’t need help any more. The first ten kids were then loaned to another village association to help yet more people. One gift of ten goats was ‘recycled’ and went on and on helping people in desperate need.

This modern day parable shows how small-scale projects, month after month, make good things happen. One goat in Burundi costs just £12. In Uganda and Sudan just £6 each and although prices are going up very quickly, goats still represent one of the best ways of helping a family to escape poverty forever. 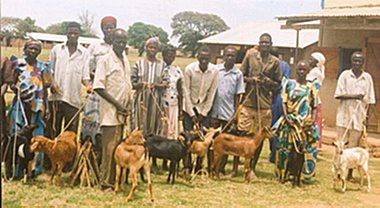